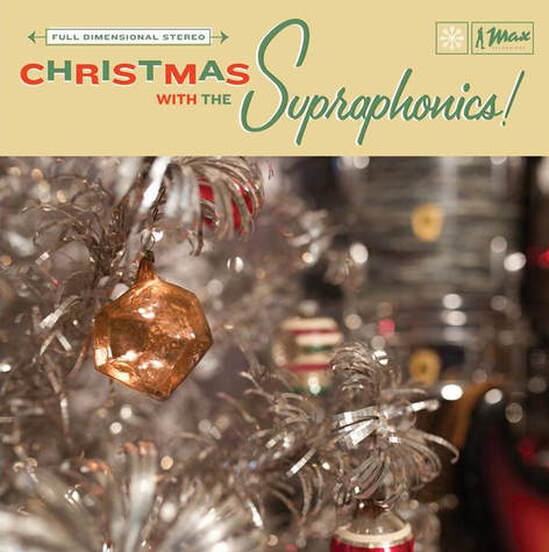 Did the world need another instrumental surf-inspired Christmas album?  Probably not.  The Ventures made the only one you ever really need.  Los Straitjackets made a couple great ones.  Other surf bands made some too.  Still, I was compelled to make this one.  Why?  I just really like surf music.  And I really really like Christmas music.  And I hoped I could put a few twists and turns in the choice of songs and arrangements to make it somewhat interesting.  Below I describe some of those twists and turns.  In general though, the guiding principle of this album was: be inspired mostly by the late 1960s Ventures’ psychedelic period, e.g., albums like   Guitar Freakout  and   Super Psychedelics.  To that end I used a bunch of fuzz, wah-wah, and other swirly stuff on the guitar tones; electric 12-string and baritone guitars here and there; and liberal amounts of organ, electric piano, and early synth tones (including a Mellotron strings patch).

2.   Little Saint Nick.   I had never heard an instrumental surf arrangement of this song before and wanted to give it a try.  It turned out to be one of the trickier melodies to get right.  The verses use the same basic melody structure, but each verse has slightly different lyrics and lines working off the basic melody.  It was a blast to do.

3.   Blue Christmas.   I had to have an Elvis song on this record, and his rendition of “Blue Christmas” is about as Elvis as you can get.  I applied a theme that recurs throughout the record—get more fuzzy and wah-y as the song goes along.  It’s a pretty basic “surf beat” and arrangement, but starts with a faux-country intro.

4.   It Came Upon the Midnight Clear.   Speaking of country, I wanted to do a country-inspired arrangement, and working off a Tammy Wynette cover seemed the right thing to do.  I did a waltz beat, used the one-and-only acoustic guitar on the record (tucked in on the left), and tried to get some late-60s early- 70s country vibes going with the baritone guitar, slide guitar line, Wurlitzer piano, and fake string-type stuff (Mellotron and Moog).  I couldn’t help myself with the fuzz and wah stuff in the choruses.  Sorry, Tammy.

6.   Santa! I Know Him!   Written by Geoffrey Curran.  Published by Elfhead Music (BMI).   This is the last song I recorded.  A personal goal was to include an original song on the record like The Ventures and Los Straitjackets.  Some of my favorite Ventures songs are their original compositions, such as “Love Goddess of Venus” on The Ventures in Space.  What is an original instrumental surf Christmas song?  Basically it is a regular surf instrumental song with sleigh bells playing the whole way through (and glockenspiel).  But, I wanted to have it be more obviously “Christmas-y.”  The original idea was to sample dialog from the movie Elf and base the song loosely on the structure of The Ventures’ song “Guitar Freakout.”  (Regular parts followed by a yell and then a real fast part…)  Well, Warner Brothers Entertainment denied our request to use the actual dialog, so I had my 11-year old son do the lines.  Can they still sue me?  Given that this album will literally sell in the dozens, I hope they see it is not worth their while.

7.   O Come, All Ye Faithful.   Perhaps the least inspired of choices for a cover (seems like everyone has done a version), but it’s the heaviest surf-rocker of this collection.  Probably nobody will do a better rock version of this song than Twisted Sister, but I tried… even though I used a pretty straight surf beat.  This one definitely follows the formula of using more fuzz with each verse, and the wah pedal finally surfaces (almost went one song without it…) on the last verse.  The bass line seems to be the coolest thing in it.

8.   Jingle, Jingle, Jingle.   Perhaps the most inspired choice, a “deep cut” from the Rudolph TV special.  I might yet do that whole soundtrack.  Who else wants to hear an instrumental surf version of “We’re a Couple of Misfits?”  I used a 60s Harmony archtop jazz guitar, neck pickup, for the melody part.  It’s an awesome sounding thing.  I really wanted to yell “Ho Ho!” at the end, but didn’t.  With an extended outro, the song almost made two minutes.

9.   I’ll Be Home for Christmas.   A melancholy thing, this.  All of the flourishes between the “vocal” lines are basically lifted whole cloth from the Dean Martin version, but the beat and basic tracks offer a different feel.  My younger son, Joe, not even aged one at the time, appears with gurgles at the end to break your heart.

10.   Christmas Time Is Here.   I used my secret weapon on this song—a Paul Reed Smith CE bolt-on made in 1993.  While PRS guitars are the absolute height of un-cool in the usual music circles I run in (Americana, roots rock, alt-country), this thing is JUST AWESOME.  Can make the most amazing sounds.  I used the “4th position” (neck and middle pick up) for the super hollow sound and went direct into a 60s Supro amp and a 90s Vox amp where the tremolos were set at different timings.  I panned them mostly left/right.  Headphone listening  really highlights the effect.   Wurlitzer piano takes over for a bit.  Overall though this song is peaceful, quiet, and relaxing all the way through.  And it’s my wife’s favorite.

11.   The Little Drummer Boy.   Time to wake up again with a loud one.  I really like the Los Straitjackets version of this song, but I tried to do more of a Friends of Dean Martinez version.  No trumpets, as I can’t play trumpet, but I did do an extended drum solo to “play my best for him.”  The main melody guitar is the baritone (Telecaster) again.  P-90s.  Dang.  And quite the fuzz-plus-distortion tone in the last verse.  And creamy feedback.

12.   Winter Wonderland.   Well, this one is pretty surf-rock too.  Again with the fuzz and wah.  And I threw in a phaser in the last verse for an added twist.  The last flourish is a little shreddy.  Maybe the next album will be all metal covers?